Usually an activity is carried out in a process step which we integrate via the activity repository. But in BPM you can also embed entire processes in one process step. This allows you to display large processes in a more compact way and thus reduce the visual complexity. In the next image the process step SubProcess contains a subprocess.

A subprocess can contain a collection of activities (process steps) or another subprocess again. This leads to a hierarchical process structure in which, however, no cycles are allowed. The following figure shows a subprocess with input and output parameters.

After the insertion, a wizard window opens in which you can select the type of subprocess embedded, referenced or forked. You can choose between different forms of embedding a subprocess in the main process as well as execution modes. 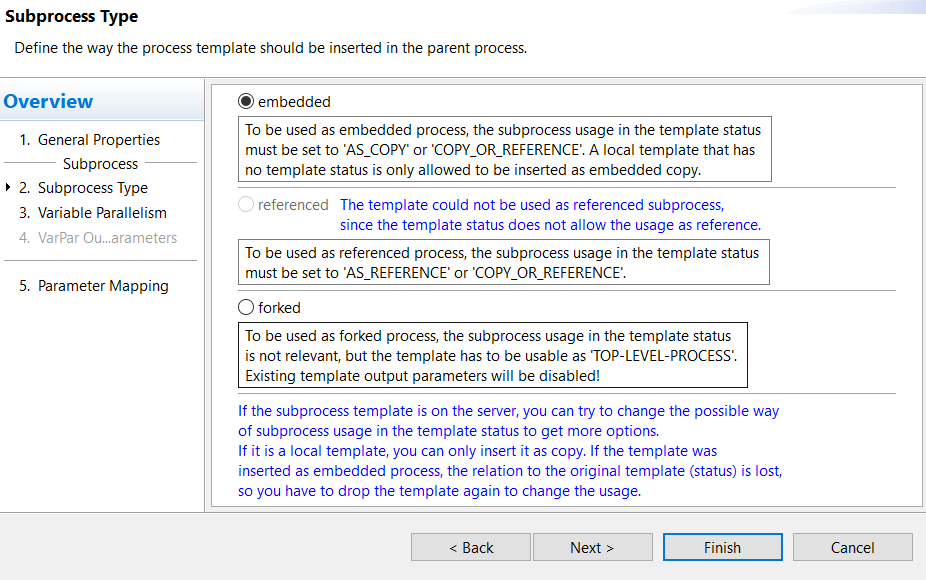 If a process template is no longer used, it is set to the OUTDATED state. This corresponds logically to their deletion. However you also have to set the template to not instantiable as well as top level (Top-Level Process Scope) and subprocess (Sub-Process Scope) as shown in next image.

Another advantage of the subprocesses in addition to the clarity in templates is their reusability. A subprocess no matter what type can be reused and called by several processes.

In addition to the normal input/output parameters of activities and subprocesses, there are special input parameters for nodes (system parameters). This Parameters are not used to supply the execution of the process, but rather from node attributes, for example to resolve dependencies on staff assignments rule.